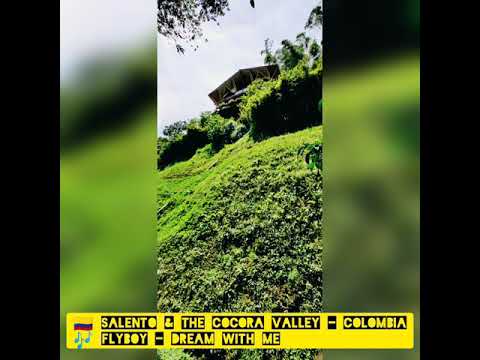 Beautiful Salento in the valleys of the Northern Colombia Andes. Maybe the best new Digital Nomad and ex-pat spot, in Colombia, the America’s and globally.

One of Colombia’s premier tourist spots, a population of around 2000 is usually boosted by a further 120000 tourists monthly as both Colombian nationals and internationals descend for mountain air, good views, coffee, food, and trekking.

As an ex-pat and Digital Nomad location, Salento offers something different. Laidback vibes and low-cost rents in this small city, big village. If you are looking for a cross of nature and mod cons Salento could be your perfect spot.

Good internet connections and sat between 2 major cities of Armenia and Pereira, Salento is the place where you can be lost in the mountains in the morning and in a plush office by afternoon.

The main thing about Salento is trekking/walking/hiking. You have options taking you up to 4000m in one day. You can get over 5000m in a couple. Then you have paradise-like strolls straight out of town.

With regard to safety, Salento has it covered. Police work differently here. You find no beggars or people stealing in the street. It’s the kind of place where you can leave your bike outside and head to a shop without a worry. In terms of Safety, although something could happen it is very similar to Europe.

Salento is the jewel of Quindío. Quindío literally translates to Paradise and in many ways, this is exactly what you will find in Salento.

Activities and Where to go:

Officially there seem to be 4 ‘slightly different seasons’, although luck seems to play more of a part.

Warm to hot in the days, cool to cold at night. Generally, Salento gets 5-10 days somewhat cloudy, then 5-10 days somewhat hot. Western European Summer style all year round. Being in the Andes rain is plentiful, although with welcome breaks in-between.

If you ever get stuck in a cool and cloudy patch, then a trip to Armenia makes a welcome break. In 25 minutes you go from cool to hot humid and usually sunny. Bring a variety of clothes.

Air BnB can be a good option for a quick stay and to get familiar with the area. Booking, hostel world can be ideal for hotels and guest houses. Once in a hotel or guesthouse it is usually quite easy to negotiate a long-term rental in either a serviced apartment or private rental.

You have about 50 places to eat, sip coffee or eat cake in Salento. Rammed in roughly a 1 square km. Explore some of the side roads of Calle Real and the Plaza for some of the better gems. Check out some of the favorites here.

Depending on your preference you can live in Salento, Colombia for under $200 per month. For the luxuries, mod-cons, and frequent travel to the local cities, then this could go over $1000. But all in all, Salento for the ex-pat or digital nomad is cheap. This is in contrast to the tourist here who often gets exploited on the gringo trail, with expensive tours and hotels. *For example moto rental at the top of Calle Real has been offered at a staggering 850000 Colombian Pesos per hour, kind of a joke when you can rent moto for an entire day for 50000.

Transport in and out

1999 earthquake took out much of the region, leaving over 1000 dead and over 200000 people homes devastated. Salento was however left unscathed.

Salento at its heart is an Artist town. Growing food and creating produce is the norm here. Creative sparks will feel at home.